For the last 11 years and 9 months we have been an Army Family. We have gone through:

The army is a complete lifestyle. It can be all encompassing sometimes. It has its own lingo, cliques, clicks, stereotypes, mathematical formulas, and even its own laws. It has its own social systems and programs. The easiest 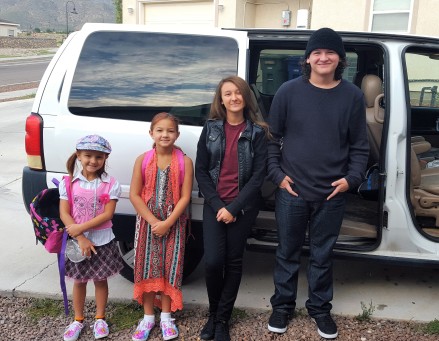 way to describe it is as if it was its own self supporting community within a community. And every branch of service has its own community.

We watched from a far; births, deaths, weddings, illnesses and even multiple parents’ cancer diagnoses. Mr. Jem has missed birthdays, holidays, coming of age events for all the kids and special school events. Our friends have become our family to help through all these rough times and celebrate the good. But even friends have come and gone because of their own careers and moves. We have shed tears, enjoyed laughs, overcome fights, and endured black outs3, did I mention training yet? I’ve done count-down4 after count-down, changed routines so many times I lost count. Every time Dad leaves and every time Dad comes home we have to change our routines. Even if it’s only for a week it still affects our  family. I think reintegration5 is harder then when they leave.

Four years ago Mr. JEM decided we would reenlist one more time because

we could not afford to get out of the army at that time. Within six months he was actively training to deploy again.  In the last four years the Longest amount of time he has been home has been eight straight months. He decided about 4 months into the current enlistment that he would not finish the last eight years of his 206.  During the last 4 years that he was “gone” two of our four children turned into teenagers. We missed every summer except for about a half of the last one and I think he was home for 1 of each kid’s birthdays in this time period. (Honestly, at this point it all has kind of blurred together) Sometimes I wonder how he adapts so fast with the kids and my own personal changes while he is away, but then other things I wish he would adapt faster. My husband is a stubborn man, who does not do change well. This might be because he has had to deal with so many changes over the last 12 years. He just wants home to be his stable thing. 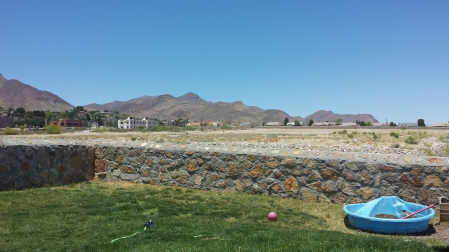 Our View for the last 7 years.

He returned 6 months ago from a short tour overseas7, non-combat related. I say short because it was 4 months less then what we thought it was going to be. BUT those 7 months were the worst 7 months we have endured yet.  He left 14 months before he was to ETS8.  They (the Army) either changed their minds or completely did not know what was going to happen to Mr. JEM (sounds crazy, but ultimately not all that uncommon) 4-6 times in the 7 months he was gone. The options included (at different times) from extend his time overseas, extend his

time in the army or push him out of the army early. Every two to four weeks it was something new. They also messed up our pay and even unmarried us in the army’s pay system.

We now have 3.5 months until we are out of the active duty Army. And as I look back over the last 12 years I am amazed of how I have stayed so… well, strong.  How any military spouse can stay so strong is hidden to me. Most will just say because “we have too”. Maybe the answer is as simple as that… Military families stay strong because they have too, if they don’t, then normally they aren’t families anymore.

Our Home for the last 7 years.

JEM will start his Transition Leave9. We will pack up all our worldly possessions, move away from our home that we have lived in for the last 7 years, rip our children out of their schools, and move 2800 miles north. We will be leaving behind not only memories of who we have met along the way but also the lifestyle we’ve been accustomed to. While living without our STUFF for about 4 weeks we will be thrown into a world we have not seen in 12 years. We will be living in someone else’s house starting our new lives together. We will have to rely only our lessons we have learned along the way and each other.

“WHY the HELL would you do this?” You might be thinking. The only answer, I can find, is we will finally be together again. We all have different emotions about this, but for the most part excitement runs rampant in our family right now (both good and bad). We will need this time to learn who each other is all over again and be a whole family…to be

With out each other we have no one.

a healthy happy family again. We will make it though, we will also do it in a very fashionable way because we have learned lessons of surviving tough times, how to be well during change and straight up why family matters. Nothing can hold us back when we are together.

When I told Mr. JEM I wanted to write about our ETS journey he said I had to add a back story. So I started with our back story. I am surprised at how many feelings came up during typing this all out. It was almost like I released it all back into the world to receive a new outlook on everything. I would like to invite you all to follow along with our journey to a new life. I plan to do monthly update stories, I will also share hints and tips on how to stay healthy, well and stress free, along with how we made life’s challenges easier during the lifestyle change and straight up support for others dealing with any issues that may arise in their military lifestyle or the switch. If you know someone who may be going through the same thing or needs support send them our way.

Best ways to connect with me:

Email Subscribe at the top of my side bar.

Army terms from a wife’s point of view: (if I missed something just ask)

3 Count-Down- A count-down is used to help remind the family that the separation will be over soon. Some people also use count ups. Basically how many days until Daddy comes home.

4 R&R – Rest and Relaxation. Soldiers come home at the half way point of a deployment for two weeks. This sounds great but it is not always a happy go lucky time. Why you ask, because soldier is ripped out of combat, thrown back into family life for 2 weeks only to travel back to combat for another 3-6 months.

5 Reintegration- Term used for when a soldier comes back into the family or civilian life after being away for any amount of time.

7 Short tour – a tour of duty lasting less than 2 years, usually out of country.

8 ETS – End Term Service. The end of contractual agreement between Army and individual…the date your obligation of service is complete

9 Transition Leave – The last leave period in the army. A period of time where you’re still “in the army” but don’t have to go back.